Melanie Moore was just doing her job. After helping deliver a stillborn baby, she knew in the back of her mind something could go wrong. She never expected to be arrested for doing her job. The Board of Medical Examiners arrested Moore, an Iowa midwife, for practicing medicine without a license in 2007.

It was a risk Moore didn’t choose to take; it came automatically with the job. There is no licensure for midwives in the state of Iowa, so simply being a midwife put her in jeopardy.

Midwifery isn’t a new career, or dangerous for that matter. Really, they’ve been around as long as humans have walked the earth. It was only in the last 150 years that doctors have taken over that role.

For Moore, the run-in with police ended there. She signed a plea bargain, cease and desist order and the charges were dropped. But for many midwives, it’s harder.

It’s something that women across the state of Iowa recognize. They’re advocating for new legislation that would allow midwives to obtain a license, preventing further arrests, and keeping natural in-home births a reality for all mothers.

Because of the fine line of legality midwives tread, Moore and others in the profession have difficulty advertising their practices. They rely on networks like the Iowa Birth Organization and Iowa Midwives Association, even sometimes word of mouth.

“I had my first child in the hospital, and that was because I didn’t know I had another option,” said Mandi Hillman, president of the Iowa Birth Organization. “Even if I did, I might have made that first decision for my baby, but I think many decisions are made from fear and misinformation.”

Hillman says many women she encounters are misinformed about the risk of homebirth. They also assume giving birth in a hospital is the only option and would never even consider another alternative.

Hillman is a doula, or a women’s “birth coach.” She supports women physically and emotionally, before, during and after childbirth, while a midwife assists women in the childbirth process.

Until legislation is passed that would halt the prosecution of midwives, women will keep looking to underground networks of midwives for the care they desire.

“We are charging these women with felonies,” Hillman said. “She could cross the border into another state and she’s legal, but she’s here and she’s practicing her trade and it’s illegal.”

Hillman said it would have looked to create a license and license board for already nationally certified midwives. Iowa midwives have already taken exams, done the schooling and been recognized as competent in their field. They’re a workforce, ready to attend births, but until the laws change, they’re stuck in between. In 2010, a bill to address that was introduced to the Senate, but it failed. There hasn’t been much legislative progress since.

They’re practicing in a gray area. Just 10 years ago, women could give birth at home with their neighbors catching their babies, but it was illegal for them to hire a certified practicing midwife (CPM). About half of the U.S. states license midwives, but Iowa isn’t one of them.

Megan Suhr, a doula in Iowa for over 20 years, is a big supporter of access to care.

“Looking for a midwife is really through word of mouth or contacting groups like the Iowa Birth Organization and Friends of Iowa Midwives,” Suhr said. “These places prescreen women to make sure they are truly seeking this type of care and gain access to midwives.”

The Benefits of a Natural Birth

A study published last month in the Journal of Midwifery and Women’s Health found that almost 94 percent of the nearly 17,000 participants had a spontaneous vaginal birth. The cesarean rate for this study was 5.2 percent, while the national average is 33 percent.

“The United States has the worst maternal mortality rate out of 50 industrialized countries,” Suhr said. “With all of the great technologies it has, this is not acceptable.”

“It’s a huge cost benefit to not only states, but families,” Suhr said.

Without a state license, midwifery care is not covered under the majority of insurance plans, and many women must pay out of pocket for care. If they were licensed providers, families would get more access to insurance coverage.

Currently, there’s one form of regulated midwifery: Certified Nurse-Midwives (CNMs). CNMs practice almost exclusively in hospital settings and are reimbursed through Medicaid. Their services are regulated through the State Board.

On the other hand, CPMs specialize in out-of-hospital births. They’re nationally certified and require clinical experience and training to earn their status. They aren’t state regulated like CNMs. It’s a change that the Iowa Birth Organization and other midwife advocate groups hope to see.

Diane Tinker, a certified birth doula and childbirth educator in the Des Moines area sees many benefits from the legalization of CPMs.

“If legislation were to pass for licensure of CPMs in Iowa, many more childbearing women, especially in rural areas of the state, would likely have greater access to midwifery care,” Tinker said. “How it stands now, women and their families who do not reside in metropolitan areas of Iowa, either have to travel a great distance for midwifery care and to give birth or settle for the local Family Practitioner or OB who may not be supportive of the kind of birth that is desired.”

Access to hospitals is a tricky task for small-town Iowans. A woman living in Carroll would have to travel more than an hour-and-a-half to get to the nearest hospital in Des Moines.

The lack of awareness significantly narrows the market for mothers, and costs cut that down even more.

“We have CPMs in our state, and they can’t take insurance because they aren’t legal,” Hillman said. “How can we say it’s equal access when as a doula and a childbirth educator the number one thing I hear people say is, ‘I would have liked to have an out of hospital birth, but I couldn’t afford it.’”
Some women don’t think they even have the choice.

About 75 percent of Iowa hospitals have a ban or de facto ban on VBAC (vaginal birth after C-section). With the ban, if a woman has had a C-section, her next child must be born through C-section again.

“This is not because bodies don’t work but because it’s hospital policy,” Suhr said.

C-sections cost twice as much as natural births, and VBACs can have a higher rate of complications like uterine rupture.

Advocates for midwifery believe the licensing of midwifery and access to care stems from a larger issue of human rights and bodily autonomy.

“Human autonomy is an essential life need for people,” Suhr said. “Being able to decide who, how and with whom you’d like to give birth is essential for the autonomy of families and women.”

Suhr believes this lack of autonomy comes from disempowerment and women feeling like they aren’t being heard and don’t have choices. Some are even forced into having medical procedures they don’t want.

Renee Cramer, a law, politics and society professor at Drake University, specializes in reproductive health politics. She thinks we need to change the whole culture of birth.

“We need to make women feel empowered to labor and deliver in safe ways that feel comfortable,” Cramer said. “That includes not judging women who have cesareans or pursue home births but giving them a full range of options that are healthy and appropriate for their families.”

Libby Crimmings felt anything but empowered when she went to her first birthing class at Lutheran Hospital in Des Moines.

“It was so appalling to me,” Crimmings said. “It was just one big sales pitch for drugs, and the teachers were condescending and rude to women who brought up natural birth options.”

It was the last straw for Crimmings. She turned to midwifery instead.

And she’s glad she did. The whole-body approach and personal care was exactly what she was seeking.

For each prenatal visit Crimmings had for her second child, Keegan, a midwife met with her for at least one hour. This is unheard of for typical OB/GYN visits, she said.

“An OB looks at you as a pregnant person and that’s it,” Crimmings said. “I felt like I was just taking a number and they didn’t know or care about me.”

It was also a chance for Crimmings to see that birth doesn’t have to be terrifying, as it is often portrayed.

“Our knowledge and intuition as women is incredible,” Crimmings said. “I felt like superwoman when giving birth.”
She just hopes other women can experience that, too, and with the lack of government licensing, that possibility might slip away unnoticed. 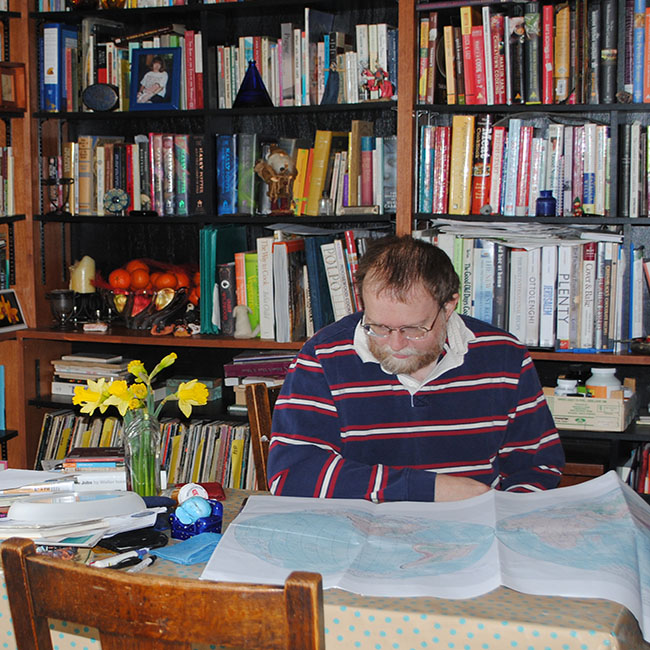 Nat Case’s dining room table is about the only flat surface in his home large enough to contain his map of the world, a draft of his latest work. The mapmaker is proudest of this one, mostly because its details speak loudly to his commitment to the physicality of what he creates. His world map is 25 feet long and 13 wide. Its color scheme is a refined blend of light blues and sandy browns, its font a confident serif…