Along the forest floor runs a thick tube of black piping, weaving its way through the trees and bushes and rocks to a small stream. The stream carries gallons and gallons of water back through the woods to a mini-farm of sorts. There may be a small greenhouse, perhaps a truck and a giant propane tank. Surrounding the clearing are hundreds of pellets of rat poison and empty bottles of rodenticides.

The mini-farm is home to an illegal marijuana growth site.

It’s nothing new in the hills of northern California, but over time the underground marijuana industry on public and Native-American lands has created several problems — like millions of pounds of garbage left behind on abandoned sites, and public trails becoming too dangerous for visitors as drug cartel members armed with machine guns stand ready to defend their investment at any cost.

Mourad Gabriel, a scientist at the University of California-Davis, discovered one particular detail that’s quite alarming for California wildlife.

The rodenticides used to deter forest creatures and bugs from visiting the growing sites and grazing on the marijuana plants, have been connected to poisoning the Pacific fisher, a tree-dwelling predator resembling a mash-up of a wolverine and an otter. It’s a member of the weasel family, and a West Coast endangered species candidate for the U.S. Fish and Wildlife Service.

Gabriel found that 80 percent of the fishers he has studied from 2007 to 2011 were exposed to some form of rodenticide.

Extrapolating from data on the impact such substances have on cats and dogs, two direct problems can arise for the fisher, Gabriel said.

The first is micro-hemorrhages because the pesticides interfere with normal blood clotting. In a typical day, everyone suffers some sort of micro-hemorrhage: an elbow smacking the doorway, a knee bumping against the desk or a head colliding with a low ceiling. Tiny internal bruises form, but nothing harmful really happens because the body clots properly.

When high doses of these pesticides are consumed, a minor bump, scrape, fall or injury could result in the animal bleeding to death. In other circumstances, Gabriel said, the pesticides damage the veins, which begin to leak blood into the body cavity.

“We find a mass of blood,” Gabriel said. “So one-third to one-half of that fisher’s blood volume has been just slowly leaked out into its chest cavity or its abdominal cavity, and therefore, it’s a very painful death.”

Gabriel and his team have found nine fishers that have died from this type of rodenticide poisoning associated with illegal marijuana cultivation. Many of the chemicals and poisons used are illegal in the United States. Just 10.5 pounds of rat poison could kill more than 1,700 squirrels.

Part of the issue rests with the fishers’ food supply. A fisher’s diet mainly consists of rodents — making up between 40 and 60 percent of its diet. If squirrels and small forest animals die from rodenticides used by illegal marijuana growers, the fisher would need to make drastic diet changes.

“When you have just a couple pellets that can kill one squirrel, and you have thousands upon thousands of pellets out in the forest in one area, you can see that it may not just be the direct poisoning effects for the species, but it could be the depleting of a whole prey population out there,” Gabriel said.

Similarly, the fishers would be forced to leave their habitat, reduce reproduction and restrict their diet. Even seemingly small changes like these can impact the surrounding ecosystem.

“There’s a fine balance,” Gabriel said. “Manipulating that balance leads to a potential cascading effect of issues and problems. So if you were to completely remove the fisher from the ecology of the landscape, I would suspect that we could see a potential trickle-down effect, which has been documented in other ecologies when you remove an apex predator.”

Now, Gabriel is investigating how these rodenticides might also affect the spotted owl, Sierra Nevada fox and marten populations. Misuse of the natural water supply from both legal and illegal growers has shown an impact on wild salmon, too.


Photo Courtesy of the U.S. Department of Agriculture 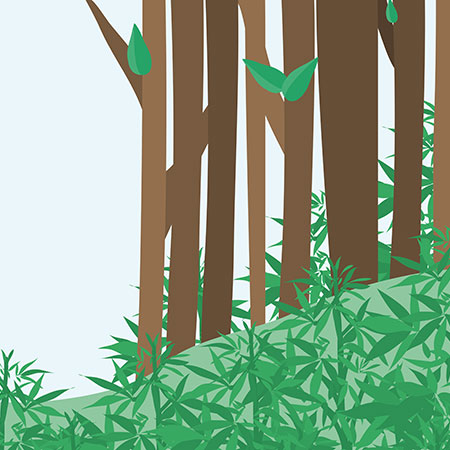 High and Dry
In northern California, wildlife and marijuana growers battle for water.

Scott Bauer trekked through the California hills, following a winding path of dirt. Only a few years ago, it flowed with rushing water, rippling with salmon and trout. But the fish are mostly gone now, only a few remain in small pools left behind by the dried-up stream. “The Coho [salmon] that were still alive in those pools, they were so skinny,” said Bauer, a salmon researcher for the California Department of Fish and Wildlife. When the river ran dry, the fish were trapped with no food and no exit strategy. Many starved…