Juvenile Justice’s Limbo
What happens when no laws allow for a constitutional first-degree murder sentence?

This is Part I of a two-part series looking into the Iowa Legislature’s failure to address a handful of juvenile justice system shortcomings. Check out Part II here.

BEFORE RE-ENTERING THE MITCHELLVILLE PRISON, where she had spent more than half her life, there was a brief moment in which Yvette Louisell thought she might be free.

It was after her resentencing hearing on Jan. 31, when District Judge James Ellefson reversed her life sentence. Louisell was charged in 1988 with the first-degree murder of Keith Stillwell, who was paraplegic. She was 17 years old, a bright-eyed freshman at Iowa State University. During her initial trial, she claimed Stillwell attempted to sexually assault her; but missing evidence resulted in a dull self-defense argument. In a unanimous decision, she was sentenced to mandatory life with no possibility of parole (LWOP).

When the court took a second look at her case this January, though, new evidence was only half the reason she earned the resentencing hearing.

In the past two years, the judicial philosophy for sentencing juveniles has shifted dramatically. It used to be that things like age and circumstances didn’t matter for first-degree murder in Iowa, since LWOP was mandatory for all cases. In June 2012, that changed: The U.S. Supreme Court ruled in Miller v. Alabama that mandatory LWOP was an unconstitutional sentence for juveniles — a cruel and unusual punishment.

At the time of the ruling, there were 38 individuals in Iowa who received the mandatory LWOP sentence as juveniles. Some may not receive new sentences if the court finds the nature of their crime warranted life. But for those like Louisell, whose sentences the court rules were unjust, there’s a problem: The Iowa Legislature has not rewritten the laws to reflect the judicial rulings. There is no statute in the law books that tells a judge how to handle juvenile first-degree murder.

If there were, Louisell, now 43, could have been released. Ellefson resentenced her to a term of 25 years, and since she had already served 26, she was eligible to walk free by Feb. 10.

But before she could, the Attorney’s General Office sent Ellefson’s decision to the Supreme Court for an appeal, and the fleeting near-taste of freedom slipped away.

“We can’t push ourselves,” Story County Attorney Stephen Holmes said to Ellefson in court, asking that he wait for the legislature to amend the law. “It is (the legislature’s) constitutional duty, and they have not done it. And I think everyone in the state of Iowa should be concerned about that.”

The legislative session closed on May 2, and a bill addressing this problem died without any progress.

This isn’t the only flaw in Iowa’s system. On lower rungs of juvenile crime there are holes, too. Not only do the mandatory minimum sentencing schemes not match the principles laid out in Miller — but even after juveniles do their time, the unintended consequences of allowing public access to juvenile records can last for life.

A bill passed April 28 improved the record-sealing process, but it doesn’t address this underlying problem.

ESCAPING KALAMAZOO, MICH., had been the goal. With divorced parents, Louisell’s home and family environment was unsupportive as she grew up, and her ticket away was ISU’s full-ride scholarship for minority students.

Louisell entered ISU as an honor student. She chose to major in political science and had law school aspirations. But her immersion in a too-wild college lifestyle led her off track. She began drinking on a nightly basis.

To make some extra cash, she nude modeled for an art class regularly, and it was there that she met 40-year-old student Keith Stillwell.

He invited her to model privately for him in his home on Sundays, so he could have some extra practice. He took her out to nice dinners and then paid her under the table. Their rendezvousing continued throughout the semester, until Dec. 6, 1987, when Louisell claims Stillwell attempted to rape her. It triggered a brash reaction, and Louisell stabbed him with a kitchen knife over 30 times. She stole his credit cards and went shopping with them the next afternoon, spending upwards of $1,000, before being arrested at the mall.

Prosecutors claimed this signified a lack of remorse, another factor — in addition to Stillwell using crutches — that contributed to her failed self-defense argument.

But what wasn’t available then was evidence of sexual abuse during Louisell’s childhood. She didn’t inform her attorneys of this during her trial in 1988, and a relative did not come forward as a witness to confirm her claims until 2005. While Louisell had recognized in past statements that this by no means justified Stillwell’s murder, it at least provided explanation for her sudden, violent reaction.

And it’s exactly the type of background information that, after Miller v. Alabama, has become even more important in cases like Louisell’s.

When the ruling was handed down in June 2012, Miller did more than redefine sentencing parameters. It asked judges to thoroughly consider the “mitigating factors” in juveniles’ lives that may have led them down a misguided path. These might include home environment, socioeconomic status, peer pressure, sexual abuse — a whole string of variables. “(Miller emphasizes) that there has to be some sort of individualized review of this particular child,” says Carmen Daugherty, policy director at the D.C.-based Campaign for Youth Justice. “I think that piece of Miller is sometimes overlooked, and the focus is more on the sentencing piece of it. But really, Miller lays out important factors that need to be considered.”

The case law came at the helm of emerging developmental brain research. Scientists took a closer look at a part of the brain called the amygdala, which generates rapid, emotional responses to danger. They found that, until the part of the brain responsible for evaluating risk — the prefrontal cortex — is fully developed around age 25, the amygdala often orchestrates quick, unwise decisions. Based on this research, Miller recognized that children lack culpability for their actions but have more capacity for change, and so they shouldn’t be treated as irredeemable citizens before their life has really begun.

“While the science is much better than it was even 10 years ago,” says Paul Stageberg, board administrator of the Iowa Division of Criminal and Juvenile Justice Planning, “laws haven’t yet changed to reflect that.”

Since the ruling in Miller, a juvenile in Iowa has not yet committed first-degree murder. But if that were to happen, judges would be at a loss when it came time for sentencing. They can’t issue the unconstitutional mandatory LWOP sentence. Yet if a judge were to follow Miller and individualize the sentence, as Ellefson aimed to do for Louisell, that’s not allowed either. In a later interview, Stephen Holmes called the situation a “no man’s land.”

Louisell is awaiting the appeal decision from the Iowa Supreme Court, which will decide whether Ellefson’s sentence of 25 years was constitutional. This could take up to a year or longer, if the appeal doesn’t make it through before the term ends on June 30. During the resentencing hearing, Louisell explained to Ellefson that her mother was in and out of the hospital, and she had hoped to be there for her.

But she also recognized in her testimony that, when she took Keith Stillwell’s life, his family didn’t have the privilege of being there for him, either.

GOVERNOR TERRY BRANSTAD HAS NEVER BEEN too thrilled about Miller v. Alabama.

“My concern has always been for the public safety,” he said in April. And his concern has been for the families of the victims, who would have to prepare for their loved one’s killer to be released earlier than expected.

He made international news when, directly following Miller, he acted on these concerns: Branstad, circumventing the Supreme Court’s ruling, replaced the sentences of all 38 juveniles serving LWOP sentences with life with parole after 60 years — a “de facto” life sentence.

The Iowa Supreme Court struck down his executive order in August 2013, in the case that would make Louisell’s resentencing possible: State v. Ragland.

Jeffrey Ragland, one of the 38, argued that Branstad’s blanket commutation still violated the Eighth Amendment’s cruel and unusual punishment statute. By the time Ragland would be eligible for parole, he would be in his mid-70s — nearing the end of his life expectancy. He won the case.

It was the first of a progressive trio that would put Iowa’s judicial system at the forefront of sentencing juveniles. In a subsequent Iowa Supreme Court case, State v. Pearson, the court ruled that, even outside the realm of first-degree murder, an excessive mandatory minimum sentence was still a cruel and unusual punishment for juveniles.

Jerry Foxhoven, a Drake University law professor and executive director of its legal clinic, would like to see this logic applied not just to severe crimes with long sentences, but to all crimes.

In fact, a sentencing provision was passed in last year’s legislative session that allowed judges to waive mandatory minimums in any offense other than a Class A felony. But the problem, Iowa Sen. Rob Hogg (D-19) said, is that “it provides no guidance.” This time around, Hogg had aimed to incorporate Miller’s principles into a bill that also would have barred mandatory minimum sentences on a handful of crimes — including Class A felonies. It would’ve given judges the sentencing guidelines that are currently lacking.

But on the other end of Foxhoven’s question are the victims, who dreadfully anticipate the release date of the person who wronged them. When lives have been lost, the extent to which an inmate has rehabilitated him or herself matters little to the families. Many are in support of a bill that would have imposed a 35-year mandatory minimum before first-degree murder offenders would be eligible for parole. This bill, which Hogg and other Democrats staunchly opposed, also did not pass during the session.

“The legislation that we had clearly said that the impact on victims should be considered by the court,” Hogg said. “The problem with (a 35-year mandatory minimum), though, is that mandatory minimums for juveniles conflicts with the individualized assessment that they’re entitled to.”

Branstad said he would support a bill that established mandatory minimums, with the best interest of public safety in mind.

It’s an idea that echoes an earlier time in his career.

Before retaking office in 2011, Branstad was governor during a time when, due in part to over-zealous media coverage, perceptions of a juvenile crime epidemic consumed the nation in paranoia. The 1990s brought a harsh crackdown on kid criminals — and Branstad’s Iowa was no exception. “Juvenile delinquents” became synonymous with “superpredators.” Nearly every state in the union passed laws making it easier to try kids as adults, keeping them behind bars as long as possible.

As a result, there was a 208 percent increase in the number of juveniles incarcerated in adult prisons between 1990 and 2004, according to the National Criminal Justice Reference Service. A 1997 Bureau of Justice Statistics study reported, “The public’s faith in the potential to rehabilitate juvenile offenders has eroded to the point where the public enthusiastically supports strategies which treat juveniles as adults, rather than segregating juveniles in more treatment-oriented environments.”

It was around this time, in 1995, that Branstad signed a bill allowing juvenile records to become public. 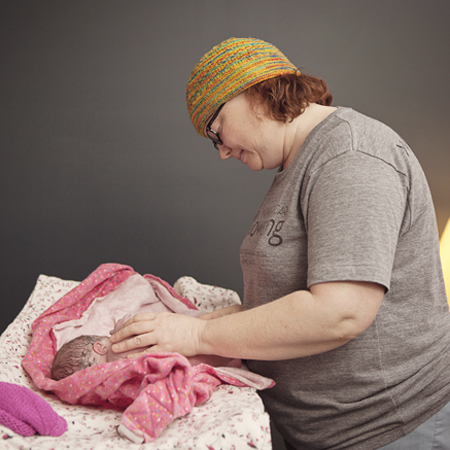 Melanie Moore was just doing her job. After helping deliver a stillborn baby, she knew in the back of her mind something could go wrong. She never expected to be arrested for doing her job. The Board of Medical Examiners arrested Moore, an Iowa midwife, for practicing medicine without a license in 2007.