The Lifelong Aftermath of Juvenile Mistakes
Digital public records are muddling the sure promise of a clean slate –– even after sealing.

This is Part II of a two-part series looking at the juvenile justice system in Iowa. Read part one here.

DONTAVIUS SHARKEY HAS STARTED speaking up about his future.

He’s incarcerated at Eldora State Training School for Boys on charges of involuntary manslaughter and reckless use of a firearm. In October 2012, 15-year-old Sharkey accidentally shot his longtime friend Corey Hamilton in the side of the head; Corey didn’t make it.

Sharkey had stolen the gun weeks earlier from a car near a Des Moines park, and he brought it over that night to trade it for a new bicycle. With no adults home in the apartment, he racked the side of the gun to empty its bullets, showing off a little for the older boys. When he wrapped his index finger snugly around the trigger, Sharkey made the grave mistake of thinking the gun was unloaded.

Had his case stayed within the juvenile system, his eighteenth birthday this October would’ve opened the door to a sealed record — a clean slate. But due to his sentence, it will open the door to prison time instead. 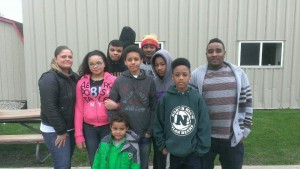 Sharkey received a youthful offender status for the crime — a type of sentence created as a compromise amid the harsh ’90s crackdown on juvenile crime. Called a “blended sentence,” it means that, although he was tried in adult criminal court, he will stay within the juvenile system until his eighteenth birthday, when a hearing will decide whether he is discharged or continues onto adult prosecution — where he could face 15 years in prison. Probation or a discharge will make him eligible for that clean slate, but there’s no guarantee. His record has been available on Iowa Courts Online for almost two years.

“It’s kind of a moot issue, because it doesn’t matter if you get your record sealed,” said Marilyn Lantz, Polk County chief juvenile court officer. “Once those records are public online, there are companies that go in and gather that and sell it to potential employers. So even if it’s sealed two years down the road, well, that’s two years too late. It’s out there.”

All social records and non-delinquent official records — which document things like foster care — are kept confidential. But that’s not the case for delinquent records, in which case the public has digital access.

An offender can reverse this by applying for a seal, once he’s 18 and two years have passed since he was charged. With the passing of a bill on April 28, this record-sealing process has become much easier.

The bill amends the law so that, at the time of the charge, the court will schedule a record-sealing hearing for each juvenile’s eligibility date, allowing all of them a chance for review.

Before the bill, offenders weren’t notified once they were eligible — which left many to incorrectly believe the seal was automatic — and they had to file the petition themselves. Plus, since many hired a lawyer, the gap continued to widen between the privileged majority who could afford to get their records sealed and the underprivileged minorities who could not. “(The bill) is an important step that makes the current sealing law much more equitable,” said Brent Pattison, an assistant Drake University law professor specializing in juvenile law.

The bill’s alleviation of some of those disparate effects is critical for a state that was found to have the worst Disproportionate Minority Impact in the country in 2007. Strong legislative efforts since then have allowed for improvement, but not by much. According to reports from 2011, black juveniles were roughly six times more likely to be arrested than white juveniles. Although they made up only 5.7 percent of the Iowa population ages 10 to 17, black kids made up a quarter of the state’s juvenile detention center population.

In a case similar to Sharkey’s, a white teenager from Kingsley, Iowa, accidentally shot his stepbrother in the chest, killing him. Like Sharkey, he received an involuntary manslaughter charge for the crime — but, unlike Sharkey, the teen never left the juvenile court. Though with an electronic monitor around his ankle, he was allowed to go home, and his record will be eligible to be sealed.

Except, even though their two tracks have differed in the short term, because of digital public records, the long-term effects still pose the same threats for both of them. This is what the bill does not fix.

These long-term effects that come with unsealed or unprotected online records have left young adults — many of them minorities — struggling to do well for themselves and succeed professionally. The effects are cyclical: Not being able to obtain work may lead to alternative, crime-laden avenues, thus restarting the cycle.

“We deal with that a lot: kids who can’t get jobs, kids who can’t get apartments,” Lantz said. “(Public records) make it much more difficult to build up the positives in a kid’s life. It stigmatizes and isolates kids, and it reduces our ability to reintegrate them back into positive things.”

To pick up the state’s slack, Johnson County created its own sub-committee to explore the confidentiality of juvenile records. Social Services Director Lynette Jacoby spearheaded a Juvenile Records Sealing Day on April 25, in which lawyers and judges offered their services freely to help young adults put the cap on past mistakes. “We need to do what we can for young people so they don’t have a lifetime of consequences for a poor choice they made during their teen years,” she said. Jacoby was happy to see the bill pass, but said it still contained holes. One of her concerns was that it might cause a scheduling overload. The best route: automatic sealing, Jacoby said.

As of press time, Branstad has yet to officially sign the bill, but said in April he would be interested in looking at legislation that improved juveniles’ privacy protection.

“There’s a delicate balance between the public’s right to know and also protecting young people that may have done some things when they were kids, then having that used against them the rest of their lives,” he said. “But the general rule is that juvenile records are not supposed to be public.”

Exceptions to this rule include official records for delinquency in every case.

HAD SHE BEEN FREED, Louisell would likely be living with a woman she met 26 years ago, at Meyer Detention Hall. Karla Frieling had seen thousands of juveniles come through during her time as a staffer, she said. But Louisell is the only one she’s kept in touch with, impressed with her efforts behind bars. Louisell had earned her bachelor’s degree, joined a religious support group and mentored other victims of sexual abuse. “She cares for others,” Frieling said. “Since she’s been in prison, she’s really used her time to do positive things not only for herself, but also for others.”

The courts will likely see more cases like Louisell’s, as the rest of the 38 petition the court for a do-over trial. But for those like Sharkey who are entering the system for the first time, swift reform in the short term may prevent the negative consequences in the long.

As for the legislature’s lack of action regarding sentencing reform, Iowa State Sen. Rob Hogg (D-19) cited both practical and political reasons for why the bill did not garner success. Practically, since the House is controlled by the Republican majority and the governor is a Republican, even if the bill passed through the Senate, Hogg does not believe it would be passed into law: The Republican Party has refused to support it. Politically, Hogg is concerned about the backlash the Democratic Party would receive for pushing too hard a bill that gives more rights to delinquents. “Why pass a bill that, first of all, is not going to become law, and then subject a bunch of people to nasty, weak-on-crime attack ads?” he said.

The record-sealing bill is a positive move forward, but the total removal of juvenile records from the public online database may be a long way off. Instead, Pattison is hoping for incremental progress. He’s hoping the legislature might follow other states’ leads in making minor juvenile offenses wholly confidential.

Nevertheless, waiting games are bleak for those at stake.

Sitting in a café a few blocks from where it all fell apart, it’s still hard for Angela Sharkey to recount what all led her son amiss. The familial division at home, his hard time at school, kiddish mischief that escalated too far. The gun.

She takes out her phone and begins scrolling through Dontavius’ Facebook page, stopping on pictures that might give a small glimpse of what her son is like.

She clicks on a picture of her most recent visit — a growing-all-too-fast Dontavius holding his 4-year-old brother, T’Angello, on his shoulders. An older photo of him at the mall with his best friend’s sister, being goofy on one of those 25-cent electronic pony rides. Another: Dontavius in his Spaghetti Works uniform on the day he got hired. She keeps her finger on this one a little longer, and she gives up on maintaining composure.

The photo reminds her exactly why her son has started speaking up.

“He’s just worried about getting out here and trying to find a job. He has a fear of rejection — you know: Who’s gonna deal with me? Who’s gonna want me? What am I gonna do for the rest of my life?” 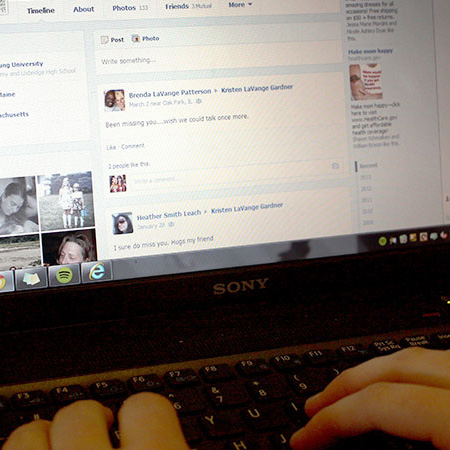 Madison Sweeney’s family didn’t have current photos of her 18-year-old brother, Christopher when he suddenly died in 2007. So, Sweeney turned to Christopher’s Facebook page to see his blue eyes and shaggy, brown hair…